If you need to customize any of the standard custom element lifecycle methods, make sure to call the super implementation (such as super.connectedCallback()) so the standard Lit functionality is maintained.

Called when an element is created. Also, it’s invoked when an existing element is upgraded, which happens when the definition for a custom element is loaded after the element is already in the DOM.

Requests an asynchronous update using the requestUpdate() method, so when a Lit component gets upgraded, it performs an update immediately.

Saves any properties already set on the element. This ensures values set before upgrade are maintained and correctly override defaults set by the component.

Perform one time initialization tasks that must be done before the first update. For example, when not using decorators, default values for properties can be set in the constructor, as shown in Declaring properties in a static properties field.

Invoked when a component is added to the document's DOM.

Lit initiates the first element update cycle after the element is connected. In preparation for rendering, Lit also ensures the renderRoot (typically, its shadowRoot) is created.

Once an element has connected to the document at least once, component updates will proceed regardless of the connection state of the element.

Invoked when a component is removed from the document's DOM.

Pauses the reactive update cycle. It is resumed when the element is connected.

Invoked when one of the element’s observedAttributes changes.

You rarely need to implement this callback.

Invoked when a component is moved to a new document.

Lit has no default behavior for this callback.

This callback should only be used for advanced use cases when the element behavior should change when it changes documents.

The reactive update cycle is triggered when a reactive property changes or when the requestUpdate() method is explicitly called. Lit performs updates asynchronously so property changes are batched — if more properties change after an update is requested, but before the update starts, all of the changes are captured in the same update.

Updates happen at microtask timing, which means they occur before the browser paints the next frame to the screen. See Jake Archibald's article on microtasks for more information about browser timing.

At a high level, the reactive update cycle is: 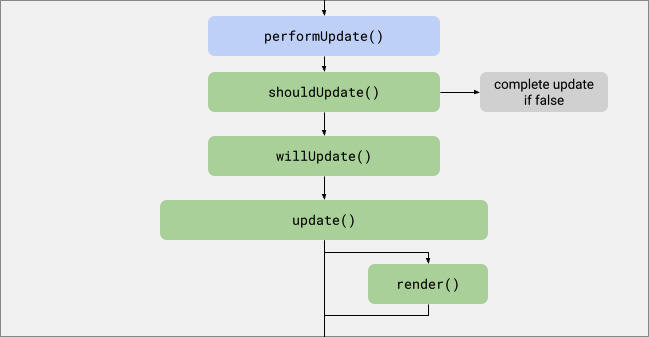 Permalink to “The changedProperties map” #

Many reactive update methods receive a Map of changed properties. The Map keys are the property names and its values are the previous property values. You can always find the current property values using this.property or this[property].

Permalink to “TypeScript types for changedProperties” #

If you're using TypeScript and you want strong type checking for the changedProperties map, you can use PropertyValues<this>, which infers the correct type for each property name.

If you're less concerned with strong typing—or you're only checking the property names, not the previous values—you could use a less restrictive type like Map<string, any>.

Changing properties during an update

Permalink to “Changing properties during an update” #

Permalink to “Triggering an update” #

An update is triggered when a reactive property changes or the requestUpdate() method is called. Since updates are performed asynchronously, any and all changes that occur before the update is performed result in only a single update.

Called when a reactive property is set. By default hasChanged() does a strict equality check and if it returns true, an update is scheduled. See configuring hasChanged() for more information.

Call requestUpdate() to schedule an explicit update. This can be useful if you need the element to update and render when something not related to a property changes. For example, a timer component might call requestUpdate() every second.

The list of properties that have changed is stored in a changedProperties map that’s passed to subsequent lifecycle methods. The map keys are the property names and its values are the previous property values.

Optionally, you can pass a property name and a previous value when calling requestUpdate(), which will be stored in the changedProperties map. This can be useful if you implement a custom getter and setter for a property. See Reactive properties for more information about implementing custom getters and setters.

Permalink to “Performing an update” #

When an update is performed, the performUpdate() method is called. This method calls a number of other lifecycle methods.

Called to determine whether an update cycle is required.

If shouldUpdate() returns true, which it does by default, then the update proceeds normally. If it returns false, the rest of the update cycle will not be called but the updateComplete Promise is still resolved.

You can implement shouldUpdate() to specify which property changes should cause updates. Use the map of changedProperties to compare current and previous values.

Called before update() to compute values needed during the update.

Implement willUpdate() to compute property values that depend on other properties and are used in the rest of the update process.

Called to update the component's DOM.

Generally, you should not need to implement this method.

Called by update() and should be implemented to return a renderable result (such as a TemplateResult) used to render the component's DOM.

The render() method has no arguments, but typically it references component properties. See Rendering for more information.

Permalink to “Completing an update” #

Called after the component's DOM has been updated the first time, immediately before updated() is called.

Implement firstUpdated() to perform one-time work after the component's DOM has been created. Some examples might include focusing a particular rendered element or adding a ResizeObserver or IntersectionObserver to an element.

Called whenever the component’s update finishes and the element's DOM has been updated and rendered.

Implement updated() to perform tasks that use element DOM after an update. For example, code that performs animation may need to measure the element DOM.

When an element updates, it may cause its children to update as well. By default, the updateComplete promise resolves when the element's update has completed, but does not wait for any children to have completed their updates. This behavior may be customized by overriding getUpdateComplete.

There are several use cases for needing to know when an element's update has completed:

Handling errors in the update cycle

Permalink to “Handling errors in the update cycle” #

You may also want to use a try/catch if you're awaiting the updateComplete promise:

In some cases, code may throw in unexpected places. As a fallback, you can add a handler for window.onunhandledrejection to catch these issues. For example, you could use this report errors back to a backend service to help diagnose issues that are hard to reproduce.

This section covers some less-common methods for customizing the update cycle.

Override scheduleUpdate() to customize the timing of the update. scheduleUpdate() is called when an update is about to be performed, and by default it calls performUpdate() immediately. Override it to defer the update—this technique can be used to unblock the main rendering/event thread.

For example, the following code schedules the update to occur after the next frame paints, which can reduce jank if the update is expensive:

Implements the reactive update cycle, calling the other methods, like shouldUpdate(), update(), and updated().

Call performUpdate() to immediately process a pending update. This should generally not be needed, but it can be done in rare cases when you need to update synchronously. (If there is no update pending, you can call requestUpdate() followed by `performUpdate() to force a synchronous update.)

It's recommended to override the getUpdateComplete() method instead of the updateComplete getter to ensure compatibility with users who are using TypeScript's ES5 output (see TypeScript#338).

In addition to component classes implementing lifecycle callbacks, external code, such as decorators may need to hook into a component's lifecycle.

addInitializer() allows code that has access to a Lit class definition to run code when instances of the class are constructed.

This is very useful when writing custom decorators. Decorators are run at class definition time, and can do things like replace field and method definitions. If they also need to do work when an instance is created, they must call addInitializer(). It will be common to use this to add a reactive controller so decorators can hook into the component lifecycle:

Decorating a field will then cause each instance to run an initializer that adds a controller:

addController() adds a reactive controller to a Lit component so that the component invokes the controller's lifecycle callbacks. See the Reactive Controller docs for more information.

removeController() removes a reactive controller so it no longer receives lifecycle callbacks from this component.

Lit's server-side rendering package is currently under active development so the following information is subject to change. 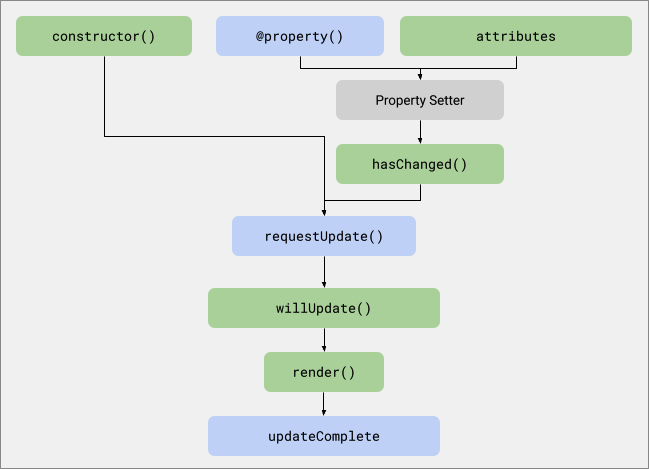