The most common way to handle complexity and factor Lit code into separate units is component composition: that is, the process of building a large, complex component out of smaller, simpler components. Imagine you've been tasked with implementing a screen of UI:

You can probably identify the areas which will involve some complexity to implement. Chances are, those could be components.

By isolating the complexity into specific components, you make the job much simpler, and you can then compose these components together to create the overall design.

For example, the fairly simple screenshot above involves a number of possible components: a top bar, a menu button, a drawer with menu items for navigating the current section; and a main content area. Each of these could be represented by a component. A complex component, like a drawer with a navigation menu, might be broken into many smaller components: the drawer itself, a button to open and close the drawer, the menu, individual menu items.

Lit lets you compose by adding elements to your template—whether those are built-in HTML elements or custom elements.

What makes a good component

Permalink to “What makes a good component” #

When deciding how to break up functionality, there are several things that help identify when to make a new component. A piece of UI may be a good candidate for a component if one or more of the following applies:

Passing data up and down the tree

Permalink to “Passing data up and down the tree” #

When exchanging data with subcomponents, the general rule is to follow the model of the DOM: properties down, events up.

A few implications of this model:

Consider a menu component that includes a set of menu items and exposes items and selectedItem properties as part of its public API. Its DOM structure might look like this: 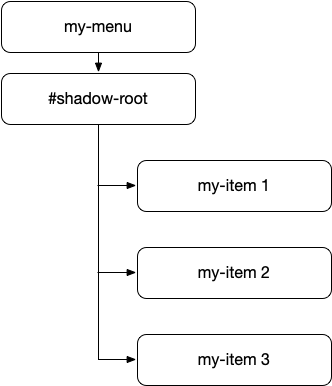 When the user selects an item, the my-menu element should update its selectedItem property. It should also fire an event to notify any owning component that the selection has changed. The complete sequence would be something like this:

For more information on dispatching and listening for events, see Events.

Passing data across the tree

Permalink to “Passing data across the tree” #

A simple way to implement the mediator pattern is by having the owning component handle events from its children, and in turn update the state of its children as necessary by passing changed data back down the tree. By adding a mediator, you can pass data across the tree using the familiar events-up, properties-down principle.

In the following example, the mediator element listens for events from the input and button elements in its shadow DOM. It controls the enabled state of the button so the user can only click Submit when there's text in the input.

Other mediator patterns include flux/Redux-style patterns where a store mediates changes and updates components via subscriptions. Having components directly subscribe to changes can help avoid needing every parent to pass along all data required by its children.

In addition to the nodes in your shadow DOM, you can render child nodes provided by the component user, like the standard <select> element can take a set of <option> elements as children and render them as menu items.

Child nodes are sometimes referred to as "light DOM" to distinguish them from the component's shadow DOM. For example:

Here the top-bar element has two light DOM children supplied by the user: a navigation button, and a title.

The component has control over whether and where the child nodes are rendered, using the <slot> element in its shadow DOM. And it can receive notifications when child nodes are added and removed by listening for the slotchange event.

For more information, see the sections on rendering children with slots and accessing slotted children.